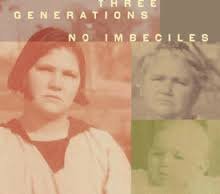 Buck v. Bell was a Supreme Court case that reflected the values and ideals of Americans living in the 1920s, raised ethical questions about the scope of American legislation, and resulted in the forced sterilization of a young woman.

The year was 1924 when Virginia issued a new law that granted superintendents of particular state mental institutions the authority to sterilize patients, even against their own will. The logic of this act was simple; if degenerates, mental defectives, and epileptics were prevented from reproducing, society at large would be the end beneficiary.

To prevent corruption or abuse of this peculiar law, Virginia allowed mental patients and epileptics to attend a preliminary administrative hearing within the institution where the patient’s reproductive fate would be discussed and determined. If attending the meeting did not suffice, patients were permitted to appeal the decision to Virginia’s courts.

In the same year that the law was passed, the superintendent of the Virginia Colony for Epileptics and Feeble-Minded ordered that Carrie Buck, an eighteen-year-old “feeble-minded” woman undergo surgery that would result in sterilization. For the colony, Buck seemed to be a prime candidate for negative eugenics, which dealt with heredity.

Not only was she the daughter of a “feeble-minded” mother in the same institution, but she herself was also mother to an illegitimate infant who purportedly was feebly minded as well. Regardless of these facts, Carrie Buck felt that nothing could justify sterilizing someone against their own will, and proceeded to fight the decision in the institutional administrative hearing.

Ms. Buck contested that the right to reproduce was, in fact, a vested right, and to take away this entitlement would violate substantive due process of law guaranteed by the Fourteenth Amendment. According to Buck, this Amendment stressed the importance of inherent rights, certain aspects of life that should and could not be regulated by the American government.

To her, reproduction was one of these vested rights. Thus, in essence, the argument surrounding Buck v. Bell came down to whether the right to reproduce was a vested right or a privilege, and if it was a vested right, was it debatable that some citizens should be denied this entitlement for the good of society?

On May 2nd, 1927, Chief Justice Oliver Wendell Holmes delivered the opinion of the court: three generations of imbeciles were enough. The court holding maintained that in light of scientific evidence that mental defectiveness could be hereditary, a “feeble-minded” individual with the ability to reproduce was a threat to society.

Following this logic, Holmes and his fellow Justices felt that the Virginia law would be beneficial for both society and the patient being sterilized because, after the surgery, the patients might be released back into a society that would not have to be threatened by even more “imbeciles.”

Furthermore, because the plaintiff was able to both attend the initial administrative hearing and to appeal to the court, there was no doubt in the Justices’ minds that Buck had been granted procedural fairness.

Avoiding the issue of vested rights, the court murkily focused on the philosophical and political ramifications of mentally defective people reproducing. Holmes somewhat subjectively observed that America as a nation has asked its “best” citizens to risk their lives for the country, therefore it would be ironic and wrong for the court to refuse to ask “imbeciles” “idiots” and epileptics to make a “lesser” sacrifice for the good of society.

He was also sure to add that rather than waiting to execute the children of mental defectives or to watch them die of starvation, it would be more humane to prevent them from being born at all.

In the annals of history, Buck v. Bell would be significant for a number of reasons. For one, a number of historical implications can be extracted from this case. Buck v. Bell was perhaps the most revealing primary source of information of the negative eugenics movement that took place in America.

In retrospect, the science of negative eugenics was most likely a result of the ramped racism, nativism and sexism of the time. The influx of immigrants in the 1920s contributed to general anxiety that native white Americans experienced at this time, and Buck v, Bell can be seen as a manifestation of this apprehension.

The sterilization of Carrie Buck also symbolized the progression of the medicalization of childbirth and demonstrated the growing authority and involvement of men when it came to reproduction.

Finally, Buck v. Bell can be seen as a window into the political and moral attitudes and feelings of Americans in the 1920’s. In a Victorian society that abhorred illegitimate children and immorality, the verdict was an example of the increasing regulations that the government had extended concerning marriage fitness and reproduction.

Republicanism, the popular ideology of the time stressed the preciousness of children and deemed women responsible for raising productive, moral citizens. As women were pushed into playing the role of moral guardian, “degenerates” such as Carrie Buck, mother of an illegitimate child and a woman deemed unfit for motherhood, were social pariahs that had to be controlled in the eyes of the government.

To this day Buck v. Bell brings philosophical and ethical issues to the table. As scientists learn more and more about human genomes and genetics, eugenics has once again become a possibility that will most likely affect expecting mothers in the near distant future.

Intellectuals grapple with the moral dilemmas this of this case: is it ethical to terminate a pregnancy on the grounds that a future child may be mentally defective? Could negative eugenics possibly promote the welfare of society? Should the scope of government legislation concerning reproduction expand? Or is reproduction a private, inherent right that should be guaranteed to everyone?

After reading the Buck v. Bell case, it is clear that the Supreme Court virtually ignored Carrie Buck’s vested rights as a human being and demonstrated a grotesque disregard for the American Constitution, because regardless of how fair due procedural process has been, the Fourteenth Amendment stresses that inherent rights cannot be denied.

Although it has been seventy-nine years since Carrie Buck underwent forced sterilization, her mournful story continues to haunt Americans, reminding them of an instance in American legal history where subjectivity and stigma held precedence over Constitutional rights.

Thank you for subscribing!

You will receive an email (at most once a week) with any new articles.

You can unsubscribe anytime with a link in the footer of the email.